The idea of hyperloop transportation appears to have caught on, as new routes are proposed all over the world. Hyperloop One, one of several companies aggressively pursuing the technology, which is essentially a maglev train traveling at near supersonic speeds in a vacuum tube, has been successful so far at raising money. The price tag of actually building most hyperloop routes is still unclear, but as it begins to come into focus, it’s apparent that the amounts of money involved are mammoth.

Hyperloop One recently raised $85 million, as Recode reports, bringing its total funding to $245 million. (That brings the company’s valuation to $700 million). Hyperloop One is also working with the Colorado Department of Transportation (CDOT) on a feasibility study to build routes in the state. Furthermore, a Colorado route has already been proposed, designed by the team Rocky Mountain Hyperloop as part of the Hyperloop One Global Challenge. Now, we also have a price tag for the proposed route.

The 360-mile route — which would connect Denver to Cheyenne, Wyoming, in the north to Colorado Springs and Pueblo in the south, and as far west as Vail ­— is expected to cost $24 billion, as The Denver Post reports. 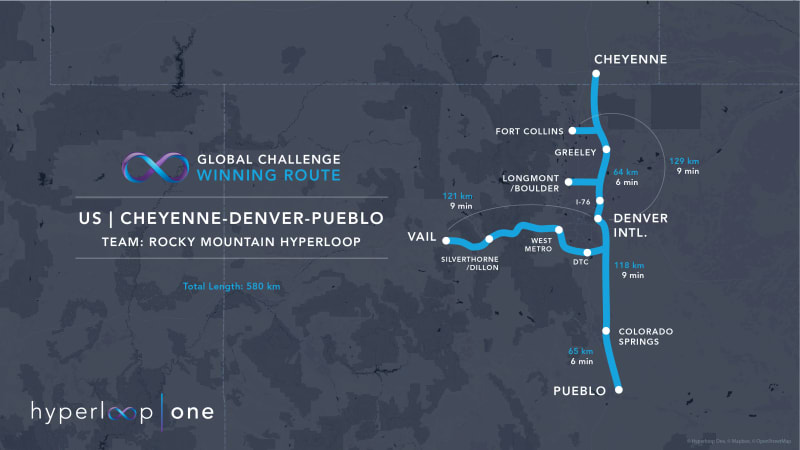 CDOT executive director Shailen Bhatt says the state would not be footing the bill, and, “The funding model will be key.” And while $24 billion is a lot to spend, the full route could provide 45 million trips in 2040, bringing in $2 billion in annual revenue. The hyperloop would also be a boon to the regional economy, serving to move freight from the Denver International Airport. It could boost gross regional product by 7 percent, or about $25 billion, by 2040.

It’s certainly an ambitious plan, but a realistic rollout would be more measured. The Colorado hyperloop would be constructed in sections, the first stretching 40 miles between DIA and the city of Greeley to the north. It’s an easy starting point, according to the CDOT report, because that section provides “fewer complications in terms of alignment and rights-of-way, and a connection to the highest growth areas of northern Colorado.” The next section would head westward into the mountains, with a stop at Silverthorne/Dillon.

Hyperloop One is rapidly developing its technology, and recently tested its XP-1 pod at 192 miles per hour at its test site in Nevada.