When one imagines the enormous executive sedan that might be driven by a wealthy lawyer or banker (or their chauffeur), the mind naturally goes to the Mercedes S-Class or the BMW 7-Series. Venerable, enormous and expensive.

But for those wanting to keep their driveway a little more understated, we also have the Lexus LS. Sure, it’s not as ostentatious as the big saloons from Munich and Stuttgart, but it has a dignified elegance all its own. For nearly three decades, the LS has been a discrete and dependable Japanese luxury sedan.

The new 2018 LS, perhaps thankfully, is a bit less discrete. We saw the new-look LS when it was introduced earlier this year in Detroit. Now we know how it drives. We put the 2018 LS through its paces on the traffic-clogged streets of San Francisco and over the Golden Gate Bridge to the twisty B-roads around Marin County and the legendary Skywalker Ranch, where we stopped for lunch.

Unfortunately, all in attendance were sworn to secrecy about the details of Skywalker Ranch, but we’re free to tell you all about the LS. Here’s our one-sentence summary, which can be used to describe many cars to bear the Lexus badge: It’s excellent in many respects, odd in a few, and incredibly, massively frustrating in one very important area. 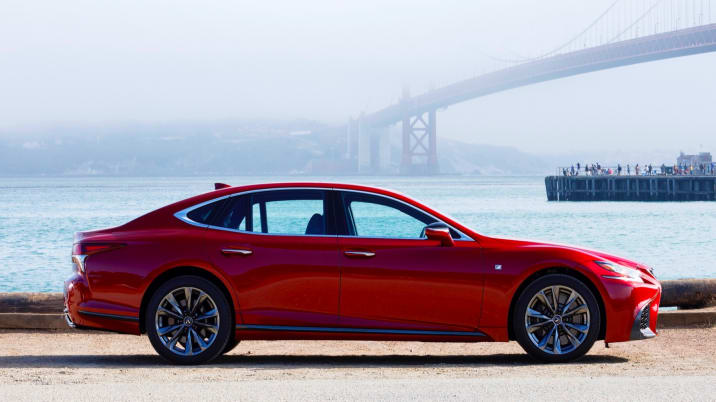 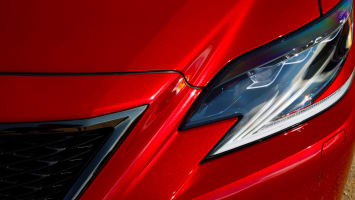 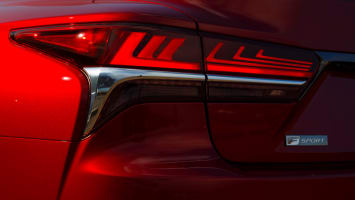 Lexus has a brand new 3.5-liter twin-turbocharged V6 paired with a 10-speed automatic transmission, a first for a premium passenger car. It produces 416 horsepower and 442 pound-feet of torque, up from 386 hp and 367 lb-ft from the outgoing naturally aspirated 4.6-liter V8.

Lexus engineers are extremely proud of the fuel efficiency of the new engine, which required some clever technical innovations (a longer bore stroke and increased valve angle) as well as tech borrowed from Formula One, including a “laser clad valve seat” that allows for a more direct flow of air into the combustion chamber and a high “tumble ratio.” In other words, Lexus figured out how to get more bang out of each gasoline-powered buck.

Fuel economy numbers are 19 city, 29 highway, and 23 combined for the RWD version and 18/27/21 for AWD, with the highway numbers particularly helped along by the 10-speed gearbox. It’s a torque converter unit, but Lexus promises shift times that rival its dual-clutch-wielding competitors. The LS is no slouch, either. In RWD trim, the nearly 5,000-pound car hustles from 0-60 mph in 4.6 seconds, according to Lexus’ reckoning.

The LS has the same drive-mode selector as the LC 500, offering Eco/Normal/Comfort/Sport/Sport+ modes that change a wide variety of settings, including the powertrain, suspension and steering setups, and the air conditioning system. It will even juice up the rather lovely engine sound that is, for better or worse, enhanced through the stereo.

If you really want a sporty feel out of your luxobarge, opt for the Performance Package on the V6 F Sport and you gain a variable gear ratio steering system, active rear steering, and an active stabilizer. The result is a car that drives much smaller than it is, and the LS handles the backroads with aplomb. It’s no sports car, but it’s fun as hell. 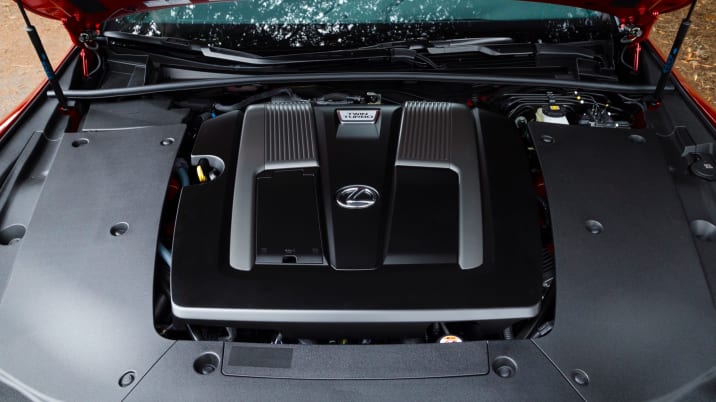 Drop it into Sport+ and the transmission is happy to hold gears well above 4,000 rpm, keeping the turbos spooled and the throttle responsive. Handling is sharp and, though I wouldn’t call the steering “precise,” it certainly gets the job done. The LS easily holds its own against the sporty versions of its competition — making a not-boring Lexus LS was one of the main goals of the engineers.

Tick the F Sport option box and you get a sportier look inside and out, including a more intricate spindle front grille (with an aerodynamic simulator feauturing 7,000 individual surfaces instead of only 5,000 for the standard LS), as well as upgraded six-piston calipers on 15.7-inch rotors up front and four-piston 14.1-inch brakes out back. That’s up from four-piston/14-inch and two-piston/13.1 inch in the standard LS.

The LS Hybrid is a revelation. It uses the same multi-stage hybrid system as the LC 500h Coupe, which came out last year, combining a naturally aspirated 3.5-liter V6 with a pair of electric motor/generators and a lithium-ion battery. Total system output is 354 horsepower, which moves the LS 500h from 0-60 in 5.1 seconds. This hybrid feels quick, and might be the one to buy, especially thanks to the impressive 25/33/28 Lexus-estimated fuel economy.

There’s a wacky-sounding CVT-plus-four-speed automatic transmission controlling the output, but it simulates a 10-speed transmission so well that you’d be hard pressed to know the difference.

The luxury continues inside, which Lexus says embraces the omotenashi principle of Japanese hospitality. Available are 28-way power adjustable front seats (if you can’t get comfortable it’s because you haven’t tried all 28 settings yet), along with the usual massaging, heating, and cooling. The chauffeur-friendly executive package includes a reclining rear passenger seat with ottoman (the front seat helpfully folds out of the way so you can stretch out), and a unique cut-glass ornamentation for the door panels that is very pretty but might not age well. The rear seat can recline up to 48 degrees (the most in the segment) and can include warming air bladders that apply pressure and warmth to the shoulder and lower back. It’s quite lovely. 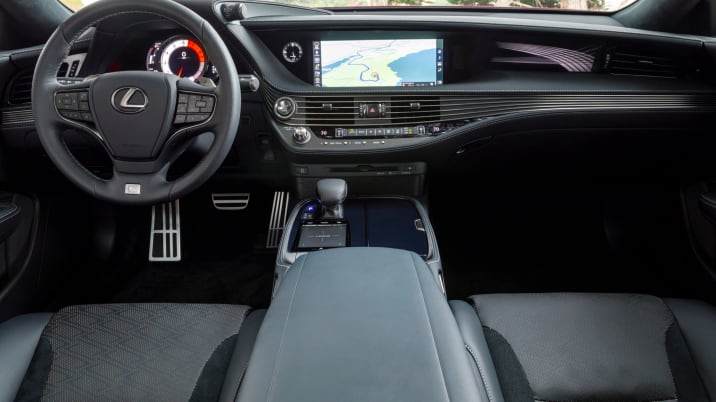 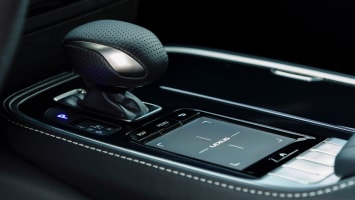 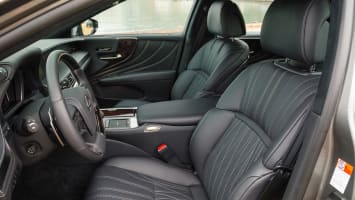 And here’s where it all goes wrong.

We’re a big fan of safety systems. Car crashes are a terrible thing, but through modern technology we can minimize or prevent many crashes. So, in a luxury sedan that starts at $75,000, that Lexus says is their flagship and most advanced vehicle, why is the most advanced safety tech an optional extra?

The Lexus Safety System+ offers things like a front pre-collision system with pedestrian detection, adaptive cruise control (which disengaged itself unexpected on some particularly sharp corners), and lane-keep assist. Those are all great — but they’re table stakes for even midlevel luxury cars at this point.

If you want to get into the more advanced safety tech, like front-cross-traffic alert, road-sign assist (the system can read speed limit and a few other road signs and display them to the driver), and a clever auto-steering assist to avoid pedestrians in the lane — you have to opt for the Lexus Safety System+ A (advanced) package.

We asked numerous Lexus representatives why the more advanced system wasn’t offered standard on their flagship car, but never really received a satisfying response. Considering that Volvo offers tech that’s nearly as advanced on its mid-$30,000’s S60 sedan, we don’t know that we can forgive Lexus here.

Finally, Lexus stubbornly insists on keeping the terrible touchpad interface for the infotainment system, which is annoying to use and reminds us that Lexus and Toyota are the only major manufacturer with no promised support for Apple CarPlay and Android Auto.

The stereo is tremendous, and the climate control settings can basically be ignored thanks to an ingenious feature called Lexus Concierge that automatically manages the climate settings, including heating and cooling the seats as necessary. But the infotainment system is so terrible and difficult to use that it makes it difficult to recommend the car at all. 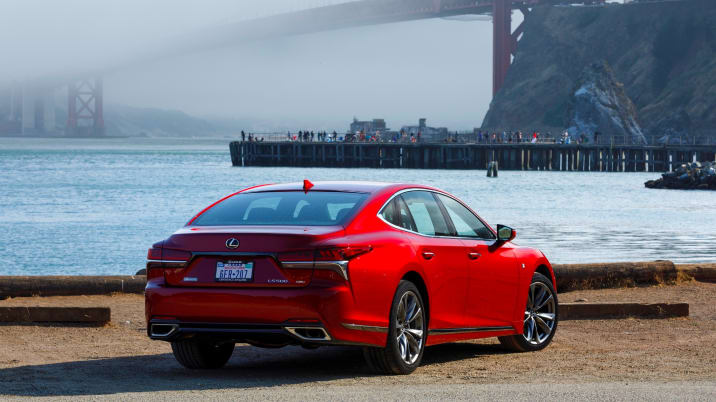 For all the fantastic work that the engineers put into the engine and powertrain, let’s be honest, the LS and all its competitors will perform more than adequately. What drivers (Lexus says LS buyers will mostly be men in their late 50’s making over $250,000) will spend most of their time looking at is the godawful infotainment system.

It doesn’t have to be this way, Lexus. You have a fantastic luxury car here. And you’ve nearly ruined it with this stupid touchpad. Why?

Lexus thinks it can sell around 12,000 LS cars per month, snagging some 15 percent of the luxury sedan market. It made an aggressive case to us that there was a value proposition in the car, starting significantly below the S-Class, 7 Series, and A8 — but we wonder how much of a difference price really makes to someone spending more than $75,000 on an executive sedan.

To be sure, the Japanese style, especially of the interior, will help the new LS stand out from the Germans a little bit, and that alone will help move some units. But as nice as the new Lexus LS is, we’re hard-pressed to come up with a reason why you would buy it over an S-Class without mentioning price. And if you’re trying to be price-competitive around $80,000, you’re probably in for a tough time.